As far as I’m aware, at the time, Quebec platoon was the largest single platoon (45) to have ever successfully passed through training at Bassingbourn. (Not sure if that record still stands.)

Having at last had the video converted and now uploaded to YouTube, I think I need to allocate some time to writing about the time I spent at Bassingbourn Barracks and how gutted I am at its closure… I consider it an honour and a privilege to have trained and served here. I loved the place. I will hopefully get something down and published soon.

During the Second World War Bassingbourn served first as an RAF station and then as a bomber airfield of the Eighth Air Force, of the United States Army Air Forces (USAAF). (The Memphis Belle).

Bassingbourn barracks were established, on the site of the former RAF Bassingbourn airfield, in January 1970. The barracks became known as the Depot for the Queen’s Division. The depot was responsible for training recruits. The recruits participated in 10 weeks basic training followed immediately with 11 weeks specialist infantry training before joining a regular battalion/corps/regiment.

During my time training the barracks trained The Royal Pioneer Corps, The Royal Anglian Regiment, Royal Regiment Fusilier and The Queen’s Regiment.

In 1993 the Barracks were re-designated the home of the “Army Training Regiment, Bassingbourn” and remained as such for nearly 20 years.

Named the ‘Memphis Belle’ by her Pilot Capt. Robert Morgan, after his sweetheart back at home, she flew her first mission on Nov 07 1942 to Brest in France. She would safely carry her crew, deliver their bomb load and return home again, a further 25 times. The Memphis Belle completed her 25th and final mission on May 17 1943.

Throughout her wartime service, the ‘Belle’ was bullet-ridden and flak damaged. On five separate occasions she had her engines shot out, and once returned to Bassingbourn with her tail almost shot off. Not a single member of her crew sustained any major injuries. 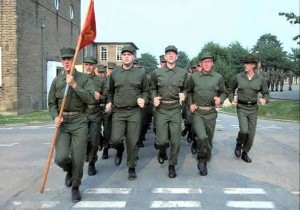 Bassingbourn Barracks was used for location filming of the movie Full Metal Jacket in 1985 standing-in for the Marine Corps Recruit Depot Parris Island, South Carolina. Other than the infamous training scenes, some of the Vietnam scenes were even filmed at Bassingbourn. Palm trees were even imported for the film and left on site afterward. (Guessing they didn’t survive too long.) British Army recruits based at Bassingbourn during the filming were used as extras.