Respect, Remembrance And A Laying To Rest…

How would we each define our personal perceptions of a balanced and peaceful civilisation? Prosperous lands, self sustainability and communities filled with peace and mutual respect?

I’m sure the British forces whom attended by air, sea, beach, town, village, desert, field, marsh and trench in WWI, WWII were sincerely hoping they would all get home to such wondrous offerings….

Instead, just less than a century after our participation in WWI we have Westminster politicians claiming war after war in the name of terror. Whether we can stomach the news and images transmitted to us from foreign lands, the massive civilian death tolls, the hideous suffering in so much of the world or not. The sad truth of the matter is, in recent years, we, Great Britain have contributed in one way or another, to way too much of the carnage.

In the case of The Great War (WWI) “The War To End All Wars” the peace they realised was less than 21 years. Approximately 994,138 paid the ultimate sacrifice to obtain 21 years peacetime for their families for whom they would never see again. 338,955 of our service men and women were never buried. 187,861 were buried but not identifiable by name. The number of British service men and women that were listed as wounded in WWI was 2,272,998. 8% of them were discharged as invalids (Approx 182,000). 7% died after the war from the wounds they received…

Today the war cries that often echo the chambers of westminster are all too frequent. Will we ever truly seek and secure alternate future. A future where we demonstrate to the world our infinite respect for past sacrifice. Before taking office the egotistical and ideological social elite hypocrites ‘we ironically, keep voting in‘, should surely buckle and bow on bended knee over the unknown warriors grave in statement that they present honorable oath to the nation. An oath, full only of clear intention, that their government will wage war with themselves in unrelenting pursuit of peace.

For the vast majority of us war is something we have become sadly accustomed to on the television. Most of it hardly even feels real. We hear about it on the radio, we see the images and read about it in the papers and online. 22 May 2013, SE18, Wellington Street, Woolwich, London, should serve as a wake up call and reminder to us all. We are in no way automatically exempt or immune to savage third world styled barbaric homeland repercussions. By no means, should our home ever be considered free from the affairs our government have seen fit for us to be directly involved. No matter your personal opinion of War, politics or religion, the great armed forces we have historically forged need our unconditional support, just as much now as at any point in history.

On the eve of Lee Rigby’s laying to rest, a 32 strong guard of honour held a vigil by his side around 9 miles from where I sit typing. The morning after, at request of his family, a private, (if you could call it that), military funeral was held. The public and media were asked to pay their respects outside the church. The service was attended by Prime Minister, David Cameron and Mayor of London Boris Johnson. It was broadcast to the thousands of mourners outside on loudspeakers and relayed around the world by most the major news channels. A book of condolence was open for signing at The Fusilier Museum in Bury.

The wave of bewilderment, grief, respect and anger that captured the nation’s hearts reached its sad pinnacle as the nation waved goodbye to a fallen comrade and protector of the British people and its crown. Lee Rigby died whilst under oath and in service to us all. 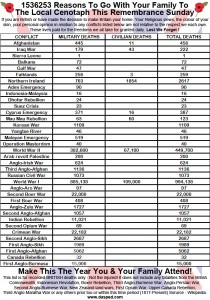 Today, almost six months later, I still hold feeling of anxiety for our future when contemplating Lee’s fate. The only question we need to ask, scrub that, ‘answer’ for the future is, what breeds such hatred and how can it be eradicated from the face of our planet.

The social and public outpouring that surrounded Lee’s passing was on a scale I’ve never seen for a soldier before. Not since Diana have I seen such an outpouring of public affection. If the loss of one brave soul can draw such passion from us and take us to the streets. I can give you 1,536,253 reasons why you should do the same thing again this coming Sunday! (Click Image Left)

It may sound silly to some, but I momentarily mourn soldiers passing in my own way. I spare a minute or two when I hear of an incident. If I’m alone I may stand for a moment and sometimes I even salute their images on my monitor or television. I mark my respects in the way I feel best to do so in the moments I hear the news. Maybe it is an ex- Squaddie thing, maybe it is just me.

For as long as I can remember, even before my time marching with the 13th Rochdale Cub-Scouts, my Father would take me to the Rochdale remembrance parade. Icy cold mornings, wintry wind, rain and sleet, early crisp blue skies I’ve seen most of it. Whatever the weather, I / we always endured it for the hour or so it takes to pay homage to our fallen. Ever since my childhood, I have always tried my hardest to attend my local remembrance day march and ceremony. Some years the parades and events I’ve attended have seen considerate attendance but mostly you can unfortunately almost predict the turnout.

Each year I can’t help but observe so many vehicles passing in haste. The horns of impatient drivers visually upset that their right of way has been blocked for the few moments it takes for a parade to pass. Passing shoppers, full of self consumption to even really notice. No doubt some without even the slightest care or interest. I’ve witnessed passing teenagers echoed screams and laughter in subways, either completely oblivious or so undereducated that they just don’t care what they interrupt.

It is sadly common knowledge that many UK school leavers apparently have better understand of American History than our own. Home education fails as parents with no real thought of attending local memorial procession and parades leave their children somewhat oblivious and without comprehension and true understanding. The children grow and only a handful will ever give deserved thought and commitment in respect of the past. And so the evolution of forgetting continues.

If I can change that in the writing of this post, if I can get one person to drop their probable relaxed morning schedule and attend their local parade this coming Sunday I’d honestly feel quite humbled. As it is, the sad reality is that those, indeed, if any do scan this post, most will in all probability already have invested interest in remembrance, but… I live in hope.

I live in hope that the 11th hour of the 11th day of the 11th month or more to the flow and whole point of this post, Remembrance Sunday will again, one day, take precedent over our nation’s hearts. I live in hope that we never forget the parted souls of yesteryear and our brave forces and civilians serving us without hesitation today.